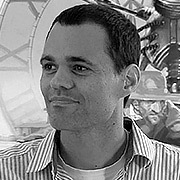 Christian Alzmann studied illustration at the Art Center College of Design in Pasadena. Upon graduating he was immediately hired into Industrial Light & Magic's art department. Currently he is a Senior Art Director there and has worked on numerous film projects including A.I., Men in Black 2, Van Helsing, Pirates of the Caribbean, Star Wars Episode Two, War of the Worlds, the fourth installment of Indiana Jones, Transformers and Terminator Salvation. As a visual storyteller Christian has also illustrated book covers for Science Fiction and Fantasy novels. His clients include Harper Collins, Penguin Books, IDG and Future Publishing. Christian's artwork has been featured in “Star Wars Mythmaking: Behind the Scenes of Attack of the Clones”, “Van Helsing: The Making of the Legend”, “Inside Men in Black II”, “Exposé” and “Spectrum” 9-16.