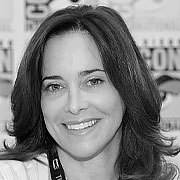 Gina DeDomenico-Flanagan is one of the industry’s most prolific costume concept artists, having worked on numerous blockbuster films and popular TV shows. Gina has also lent her talents to stars like John Legend, Lionel Richie, and Madonna, illustrating costumes for their various tours.

After graduating from Parsons School of Design in New York, where she was awarded the Bob Mackie Gold Thimble Award for her achievements, Gina quickly became one of the industry’s top illustrators. She worked for Oscar-winning designer Ruth Carter on projects such as Malcom X and Amistad, as well as being the go-to illustrator for fan favorites such as Galaxy Quest and Escape from LA. Gina then left the industry for ten years to raise her three daughters.

Today, Gina is a costume concept artist for the DC Streaming Universe, working on five shows simultaneously. She also lends her skills to UCLA, teaching classes on Illustration and Digital Illustration. She attends the San Diego Comic Con annually and speaks on panels discussing concept artistry and suit design for superhero characters.