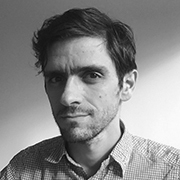 Christopher Barischoff has been working in computer graphics since 2008. His career has spanned Animation, TV/Feature VFX, and Advertising. Chris is an LA-based CG artist with over a decade of lighting experience in film, TV, commercials, and animation. He's currently the CG Supervisor for the ad agency Brand New School, working for such clients as Google, Apple, and Starbucks. Previously, he handled lighting for visual effects studios such as Framestore, Zoic Studios, and The Mill, with credits including Priest, Premium Rush, Terminator Salvation, Once Upon a Time, Fringe, Castle, Wonderland, and Pan-Am. He's also worked for multiple commercial agencies and creative houses, including Psyop, Blur Studio, Mirada, Blind, and Spinifex.