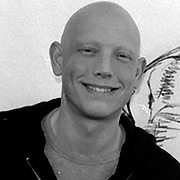 David Finch began his comic book career at the age of 22 at Top Cow Productions, part of Image Comics. There he created Ascension and Aphrodite IX, both of which were top sellers in the business, with Aphrodite IX debuting as the number one comic book in the industry. In 2001 he made the move to Marvel comics where his catalog of work included Call of Duty, Ultimate X-Men, Avengers Disassembled and The New Avengers. His run on Moon Knight skyrocketed this title into the main Marvel universe and landed him a top-five book which sold more than five times the title's previous release. David then turned his attention to working with Lost, Heroes and Smallville executive producer, Jeph Loeb, on Marvel’s smash hit Ultimatum. 2010 saw another major change in David’s career as his made the transition from Marvel Comics to DC Comics and the Warner Brothers banner. His artwork will be featured on the covers for the upcoming follow up to Darkest Night, entitled Brightest Day. In addition to his comic career, David has also worked in video games, music and film.