From Concept Model to Presentation Art

In this lecture, Scott Patton continues from 3D Character Design Volume 1 to show the processes he uses to create finished character designs for feature films. This lecture explores Patton's fast and efficient methods for creating a final color rendering using ZBrush® and Photoshop®. Patton shows how he squeezes the most from ZBrush's powerful renderer, side-stepping the often complex renderers of standard 3D packages. In creating both a wide and close-up shot of the character, he shares creative Photoshop tips and tricks to quickly get to a finished piece of concept art from the ZBrush renders, covering topics such as adding and refining skin texture, hair, eyes, shadows and scars. Patton also discusses how to quickly create backgrounds that enhance the character and overall composition. 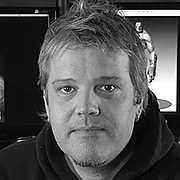 Scott Patton started his career as a make-up effects artist in the 1990s, developing his sculpting, painting and design skills under the tight production deadlines of the movie industry. Patton’s work as a make-up effects artist can be seen in a diverse range of films from Sin City and Kill Bill to Amistad and The Green Mile. While working on the Academy Award winning The Chronicles of Narnia: The Lion, the Witch and the Wardrobe, Patton discovered ZBrush and quickly realized that this tool could speed up the often frustrating character design process. Joining practical and digital sculpting in his production workflow, Patton joined Stan Winston Studios and the design team for James Cameron’s Avatar. After the unfortunate death of Stan Winston in 2008, Patton helped the remaining S.W. team in creating a digital design department for their new company Legacy Effects. Since that time, Patton and Legacy have designed characters for Indiana Jones and the Kingdom of the Crystal Skull, John Carter of Mars, Pandorum, Iron Man 2, Thor, Cowboys and Aliens, Terminator Salvation and more.