In this demonstration, legendary designer Syd Mead shares his techniques to create a finished illustration of a futuristic Airship. Image making requires the next step from mastering drawing skill and technique. To produce a sense of ‘being there’ combines drawing and technique skills with a visceral illusion called ‘presence.’ Without these elements coming successfully together, the finished image will look stilted, contrived and unbelievable. Painting with guache, a classic opaque watercolor pigment that dries with a matte finish, Syd discusses the medium, brushes and guides, while sharing his thoughts on the creation of a successful design illustration that is imbued with presence. As the process unfolds, Syd emphasizes how he effectively creates the illusion of reality through the almost abstract representation of various natural and mechanical detail. With clear vision, inspired by imagination and knowledge of the familiar, a plausible future reality comes together at the hands of a master draftsman, designer and artist. 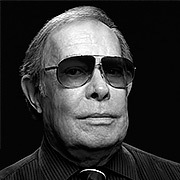 A professional career that spans over fifty years started just out of high school in Colorado Springs, Colorado creating characters and backgrounds for animated cinema intermission trailers. After three years in the Army Corps of Engineers, Syd graduated with great Distinction from the Art Center School in 1959 and was immediately hired by Ford Motor Company’s Advanced Styling studio where he began to be recognized for his futuristic style. This led to his being recruited to create corporate promotional books with Mead-Hansen Company in Chicago for US Steele and other clients over the next nine years. By 1970, Syd's reputation enabled him to found his own company, Syd Mead, Incorporated, to create industrial design and corporate graphics and, after a fortuitous move to Southern California in 1975, concept designs for the motion picture, television and electronic game industries. His cinema entrée was fortunate, starting with the creation of the V’GER entity for Star Trek: The Motion Picture followed by two cult classics: BLADERUNNER and TRON. His professional work continues to the present including numerous presentations to audiences all over the world. Syd considers his legacy to be the body of work that has provided day-to-day challenge over many years while offering clients his unique design and problem solutions. He has also provided inspiration to an audience of all ages, which has been the most satisfying of all. Syd considers the opportunity to be a guidepost for ambition in others as a priceless gift of fortunate circumstance.