Beginner’s Guide to Getting Started in Maya With Eric Keller

Get up and running quickly in Maya 2023 with this beginner’s guide tutorial by one of our most-watched instructors, Eric Keller. Introduction to Maya 2023: Volume 1 is comprised of 12 chapters that take you on a comprehensive tour of the Maya interface, covering navigation along with the many editors that you'll need to use when building 3D models and scenes.

Eric then walks through the creation of a Maya scene using a network of interconnected nodes. The relationships between these nodes define the shapes of your virtual objects, the shaders that determine the material qualities of those objects, the animation that moves them, and the lights and cameras that turn your creations into cinematic elements, game assets, scientific visualizations — or whatever you need to bring your digital art to life!

A number of helpful assets are available to download as project files with this workshop to help you with examples and to follow along with the workshop.

In Volume 2, you will explore the modeling and animation tools. In Volume 3, Eric will introduce lighting shading and reveal how to export assets for use in real-time game-editing software, like the Unreal Engine development kit. 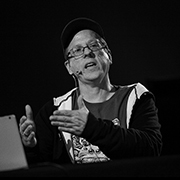 Eric has been working as a professional CG artist since 1998 creating animations and images for both the entertainment industry and scientific visualization. He has written several top-rated books on both ZBrush and Maya, as well as numerous tutorials and articles for leading industry magazines such as 3D World.

He has now authored multiple video series for The Gnomon Workshop on ZBrush and Maya and was honored to be a guest lecturer at Harvard Medical School. He has worked as a visual effects artist on commercials, television, games, and feature films for decades, with credits including 10 Cloverfield Lane, Star Trek: Beyond, Aquaman, Power Rangers, Swamp Thing, and John Wick 3: Parabellum.